With God All Things Are Possible? 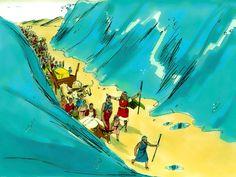 I've been reflecting upon Abraham as the father of faith and how his experience with God differs from the common experience we had prior to coming into covenant with Him.

Abraham did not allow his family traditions to define his understanding of God. He did not try to initiate a relationship with God based on those traditions. His father was an idol maker and he was surrounded by idol worshippers.

We too were called out of a system where we were surrounded by people who compared one's idols against the idols of others and exchanged ideas about idol design and construction. This felt very familiar to us as this was the system into which we were all born.

King David called this the valley of death.

God calls us back home to His bosom. He provided Himself as the door in the form of Christ Jesus. He gives the key to His elect steward of our generation that we may receive instruction in how to gain access to Him and learn to walk with Him.

We too responded to the voice of God with consideration and allowed it to influence our perspective. We too chose to follow the voice of God even when it required separation from the voices of those who were contradicting Him even when those voices were familiar to us.

We were born strangers to God but as we received instruction from Him, and weighed the things we had been taught against the things we were now learning, we found that our confidences had been falsely placed and could now build with full assurance with the new knowledge we were learning.

Brick upon brick the foundation of our understanding was laid by God through our contact with Him. We never forgot that this contact with Him was by invitation through the door of Christ with the key given to His anointed servant for our benefit.

We did not take ownership of these things which God provided us access to but did take delight in them and allowed every aspect of our lives to be influenced by them.

While the world continues on taking delight in darkness and confusion. We delight instead in the full assurance of Christ as we never depart from Him after having been reconciled to Him.

This is the true fear of the Lord. We fear isolation from Him.

This morning I woke reflecting upon "with God all things are possible".

I thought of how the key to this is often ignored by the world when they quote this. "With God". They focus on "all things are possible" as it excites their imaginations. "With God" requires responsibility. What does it mean to walk with God? The answer to this is found in the example God draws our attention to by calling Abraham the father of faith. We walk with God when we walk in active agreement with Him.

When we walk in active agreement with God, then we are allowing the voice of God to influence our choices and our perspectives. We are not favoring the desires of our heart over the desire of His heart. We then realize that with God, all things pertain to Christ. This is our common experience in the faith.

We then see that by learning to walk with Him; by learning to use all things that pertain to Christ; we can take full confidence in His ability to deliver on His promises. Even as Abraham who looked for a city whose builder and maker was God.