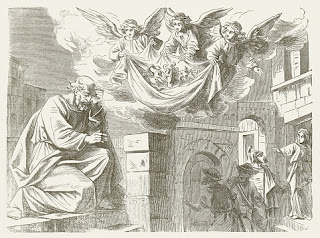 3: Received vision in 9th hour of the day

7: Cornelius did as instructed

9: Meanwhile on the next day, in Joppa, Apostle Peter, at the sixth hour, as the men from Cornelius were arriving unbeknownst to him, was on the rooftop praying.

17: As Peter was doubting what this vision could mean, the men sent from Cornelius arrived and were standing before the gate asking for him.

19: While Peter was thinking about the vision, the Spirit said to him, "Behold, three men seek you. Arise therefore and go down to them, doubting nothing: for I have sent them."

21: Peter responded in obedience to this revelatory voice and went down to ask what the reason was for their coming to him.

23: Peter took them in and on the next day they all went together to see Cornelius in Caesarea where Cornelius was waiting for them and had called together his family and friends.

25: When Peter arrived, Cornelius fell down to worship him and Peter stopped him and told him that he was a also a man.

Cornelius seemed to be recognizing that same power as before being in the presence of Peter. I recall that as we approached Michigan for the first time meeting Apostle Eric

28: Peter acknowledged to the group that it was unlawful for a Jew to keep company or come to one of another nation. He explained that God had shown him that he should not call any man common or unclean.
Peter was reflecting on the vision still
Prior to that vision, he would've responded differently when called upon by them in Joppa
This vision became a fulcrum for his discernment.
He weighed the unfolding events by the revelation he received (even though he had been doubting on what it all meant at that time)

30: Cornelius explained that he had been fasting for days prior and was in prayer when a man stood before him in bright clothing.

34: Apostle Peter began to unfold to them the record God set in Jesus Christ beginning with His baptism by the Spirit to His death and resurrection.

41: Apostle Peter identified Himself as a witness of this same record

44: While Apostle Peter was preaching this gospel of His record to them, the Holy Ghost fell on them all
John 17:20 Neither pray I for these [apostles] alone, but for them also which shall believe on me through their [apostles] word;

45: Those who had come to Christ from the Jewish tradition, as Peter had) who accompanied Apostle Peter recognized that the gift of the Holy Ghost had been poured out on these gentiles.
How would they know that?
What evidence was there?
They too had begun praying in tongues when the baptism of the Spirit fell upon them. This was the witness.
Note also that this was without the baptism of water. It was the baptism of the Spirit which they recognized as the witness which was not by the will of man but by the gift of God.

Reflecting back to my first contact with Second 8th Week Ministries

Second 8th Week Ministries has always been online and global since I first came into contact with Apostle Eric Vonanderseck and Teacher Maria VonAnderseck back in February of 2002 when I reached out with a fair bit of apprehension as you can see from the email I set to them back then:

My name is John Welty.

I'm here by invitation. I've been to the website and looked it over very briefly. I've read Eric's testimony and the introduction as well as the posts in this group up until this point.

I look forward to reading more of the website and getting to know each of you better as the time remaining allows.

It was on the 28th of February that I stopped my apprehension and embraced instruction in the doctrine of Christ:

Today is the day.

God has led me along and each time He teaches me something that requires me to dump man's doctrine I get to a point where I'm asked, "Do you believe I've taught you this?" When He asks me this, I've known that there will be a cost to obeying Him (those I love and those that love me may be convicted by the Holy Spirit when I obey what they are not obeying). When He asks me this, I've known that I have the choice to continue on with Him or walk away, but I cannot stay where He's got me. When He's asked me this, He's always had others come to me for instruction on the very thing He's teaching me. I've therefore been required to not only answer, "yes, I believe", but also to demonstrate and proclaim that which He's taught me by instructing another.

Today is the day. God has asked me today if I believe that He is teaching me what He has taught you. He's asking me if I will receive you as an apostle. He's asked me if I will receive this doctrine in whole.  He's made it clear to me that I cannot accept this doctrine in part. He's led four believers to me today who need and want the foundation of truth you are laying in my heart taught to them. He's made it clear to me that I will be asked to proclaim and demonstrate this doctrine to the elders and pastor of the physical church of which I'm a member. He's prepared them to receive me with respect as I've been raised up in their midst.

Those that He's leading to me today are ready to receive this foundation of truth and be cleansed.

I cannot teach what I do not believe and have not received from God. God is commanding me to either walk away from this doctrine in whole or receive it in whole. He's asked me to do this today. (Yesterday as of 8 minutes ago.)

The post I posted earlier was my proclaiming that I receive you as an apostle and this doctrine as being of God.

I'm writing this to you now so that you may know where I'm at and what I'm in need of.

I receive this doctrine as answered prayer.
God has made it clear that I can no longer operate in the Spirit while remaining in the doctrine of man. I was trying to do both.

Today I was asked to choose and I have chosen.

God has opened my heart, mind and soul to be regenerated, renewed and saved.

Prepared by Christ to receive in whole,

I've been growing daily in the faith ever since that day on which I made the best choice in my life and continue building on that decision along with my amazing wife, Teacher Melissa Welty 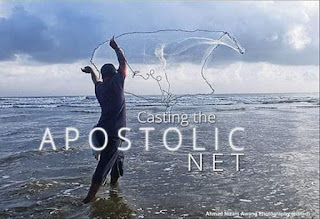